These Dump and Go Slow Cooker Recipes require no cooking or browning beforehand — simply throw it in and walk away! Easy crock pot dump meals for busy weeknights and back to school! Chicken, beef, pork, or vegetarian — there’s something for everyone!

Because we love slow cooker recipes here at The Recipe Rebel!

Honestly, sometimes I wonder if the slow cooker is the most popular kitchen appliance.

It seems like there are at least 3 gifted at every bridal shower, and it’s one of the first small appliances that adorns the kitchen counter in a new place. They are just so incredibly versatile!

This post has been updated since the original 19 from September 2016 — giving you tons more easy crock pot dinners!

I really got into the habit of using mine all the time after we had kids. Kids have a habit of soaking up every minute of the free time you had before, right?!?

Believe me, I wouldn’t change a thing. But you just get used to not having 2 hours to make dinner every night.

I remember when I first really got into experimenting in the kitchen, when my husband and I were dating and I was attending University. I used to love teaching myself to cook entirely new recipes, with entirely new ingredients — things that were foreign to me before.

But things are different now, and my goals are as well. So finding easy slow cooker recipes and crock pot dump meals that everyone will love is right up there!

I used to be a mom of a toddler working outside of the home, and I know how hectic things can be in the morning trying to get out the door with her in tow (one of the things I don’t miss!). So I wanted to come up with a collection of dump and go slow cooker recipes — things that you can just throw in and leave. No remembering to brown the meat, cook the sauce, cook the pasta, etc.

Set it and forget it.

In a few of these recipes, you might be required to finish the sauce or prepare something to serve it over, but I did my best to find you the simplest, most low-stress recipes that I could, and a good variety of them (I didn’t want just soups or just chicken breasts!). I hope you enjoy them as much as I do! 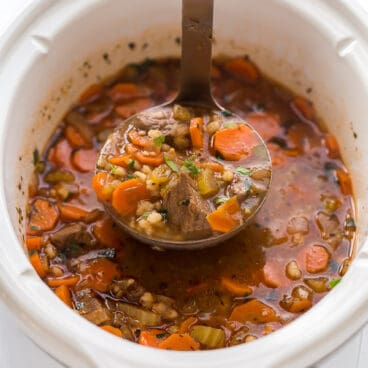