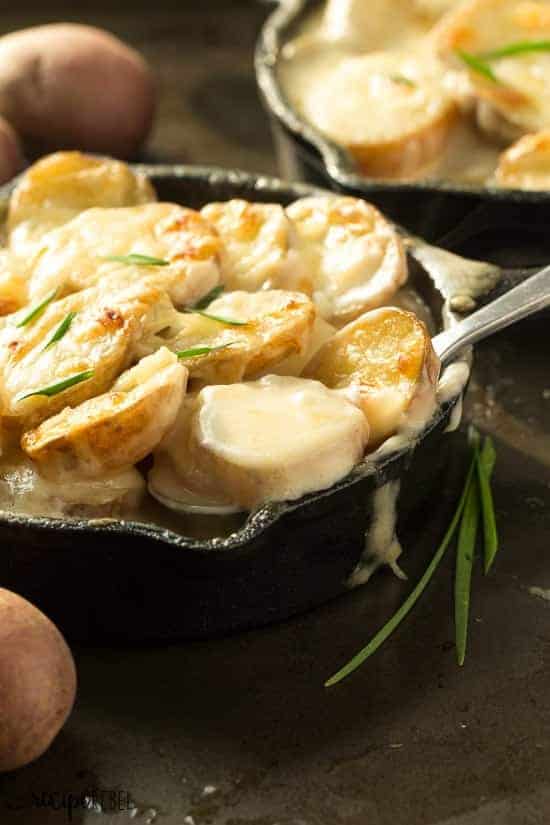 The best and easiest scalloped potatoes — they’re cooked completely in one skillet so there’s no boiling the potatoes or cooking the sauce separately!

Friends, I am a hard core scalloped potato addict.

And I can’t believe I’ve never shared this recipe with you. These are the best scalloped potatoes.

I try not to claim that every recipe I make is the best cookie/brownie/piece of chicken in the entire world, but every once in a while I just can’t help but use the B word.

There are 2 reasons I believe this to be The Best Scalloped Potatoes au Gratin:

Cutting down on cooking dishes is a pretty big deal to me. It’s never really worked well for me to just throw the potatoes and the sauce in a baking pan and stick it in the oven. But these potatoes are cooked in the sauce first on the stove top, and then finished in the oven and they are actually really easy to make.

I first found this recipe (or the recipe that inspired this recipe) on Pinterest, back in the day when I actually cooked things off of Pinterest (instead of just referring to my trusty notebook full of scribbled ideas). The original recipe is from Williams Sonoma, and though I’ve swapped out some of the ingredients for ones that are more common in our house and increased the sauce to potato ratio, the flavor is just Unreal.

I don’t usually use heavy cream when I’m cooking or baking, because, well, 35% fat. But every now and then it’s a nice way to indulge and it adds such incredible creaminess to the potatoes. And when you think about how much cream there is in the dish and how many servings there are, it’s a pretty reasonable indulgence!

I used a 1.5lb bag of Blushing Belles from The Little Potato Company, sliced, but you actually don’t even need to slice the potatoes like you would normally. The potatoes are little enough that you could just halve them, and they would cook up great in the sauce. Feel free to swap out the herbs and cheeses to suit your tastes!

The Creamer potatoes work so well in this dish — I don’t even peel them because the skin is so thin and delicate! I love how the small size works in individual skillets. The perfect way to dress up an ordinary dish!

This is such a great, simple dish for the holidays! I know it seems like they’re a long ways away, but Thanksgiving here in Canada is October 12 — that’s just a month away!

The best and easiest scalloped potatoes — they’re cooked completely in one skillet so there’s no boiling the potatoes or cooking the sauce separately! 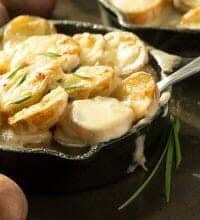 *This post is one I’ve created as part of my brand ambassadorship with The Little Potato Company and I was compensated for my time in creating this recipe. Thank you for supporting brands that make The Recipe Rebel possible!